It‘s a bit of a mouthful but the Forfar Multi Terrain Half Marathon is worth getting your teeth into.

I’d been wanting to do this race since I saw the picture of Alan Jeffrey lunging into a deep puddle while getting round the course but it sells out quick so I had to be prepared. Entries opened at 9pm one evening and I found myself logging on to Entry Central while watching Ezra Furman perform at Queen Margaret Uni – for 5 minutes I became one of those people I despise who seem to spend time at a gig glued to their phone.

Anyway, race day arrived and I drove up with the aforementioned Alan and Lee, another veteran of the race. I’d been watching the weather forecast all week and was relieved to see that the rain had disappeared with just a chance of precipitation. It was cold though.

Arrived early at the rugby club where 5 varieties of soup were being prepared for us runners and a table was creaking with sarnies and cakes – a spread to rival the best (though no haggis pies a la Feel The Burns) and an incentive to get back fast to not miss out.

Found Sarah mingling with Dundee Road Runners who accounted for what seemed like every third runner, thus making up a PRC foursome. Just under 200 runners started and as the temperature was struggling to creep above zero degrees, there were a fair few hard as nails folk in vests and shorts. For my part, hat, gloves, buff, long sleeve top were all in use but at least I was in shorts which reduced the ribbing I got from supposedly tough runners down south.

Despite discussions with those who’d experienced the course before I was still unprepared in terms of the terrain to expect – yes, there was trail but there is also tarmac and oh yeah, some guaranteed puddles. I had on my battered trail shoes in the hope these would do and I was mighty glad I hadn’t risked road shoes – there’s maybe 4 miles of tarmac all told in many sections but it’s decent trail much of the way with some superb muddy / icy puddles.

Alan started up front (as immortalised in the Dundee Courier photo!) and stayed in the first dozen all the race. Me and Lee began close by but I soon got fed up with being near other runners and gradually slipped ahead. Sarah set out simply to not finish at the back which is what she almost did last year.

The course is a clockwise circuit round Forfar and if it has any intention of attracting us back to the town for a visit it failed – you go through two housing estates and an industrial zone which are none too pretty. However, the course overall is superbly varied and never boring, requiring vigilance in many places – not just at the road crossings where there is a ridiculously antiquated checking process of stabbing you with a felt tip pen in some attempt to verify you ran the course and obeyed the marshalls – and with a decent long climb at mile 10 that presents a decent challenge just as you’re getting weary.

It drizzled a bit and I think there may have been sleet but the weather was OK. I can’t recall much after we skirted the loch at the start, it was fairly flat on paths, crossing a road, past some houses. We were then presented with a rutted farm track pock marked with frozen puddles and a rutted stretch of frozen soil down the middle that kept giving way underfoot. Turns out the easiest thing to do was just run through the icy bloody puddles and not try to find dainty footholds through the mire. Lee and Alan’s faces through this gauntlet are a delight! 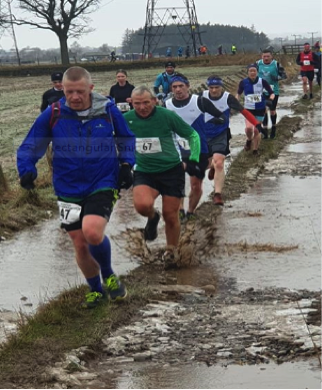 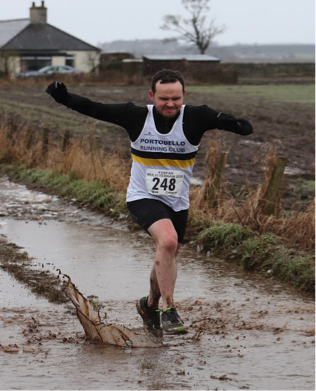 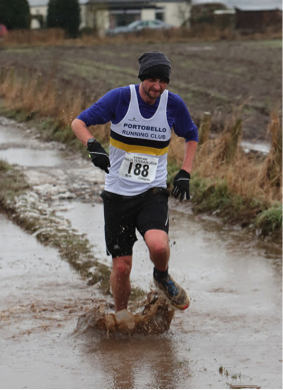 Around the 6 mile mark (there were markers all the way which I think helped me but their inaccuracy was a bother to others) a friendly voice gave a cheer and there was Luke, camera ready to snap us in our glory. Some runners manage a beaming smile, others do a crazy leap or a simple thumbs up or a cheery wave. 2020 is the year of the single finger in the air for me, it requires the least effort and avoids the grimace that is me smiling when running. Luke called out that I was 16th or 17th which gave me a real boost and by mile 8 I had overtaken 5 or 6 others and began to think of a possible top 10 finish. 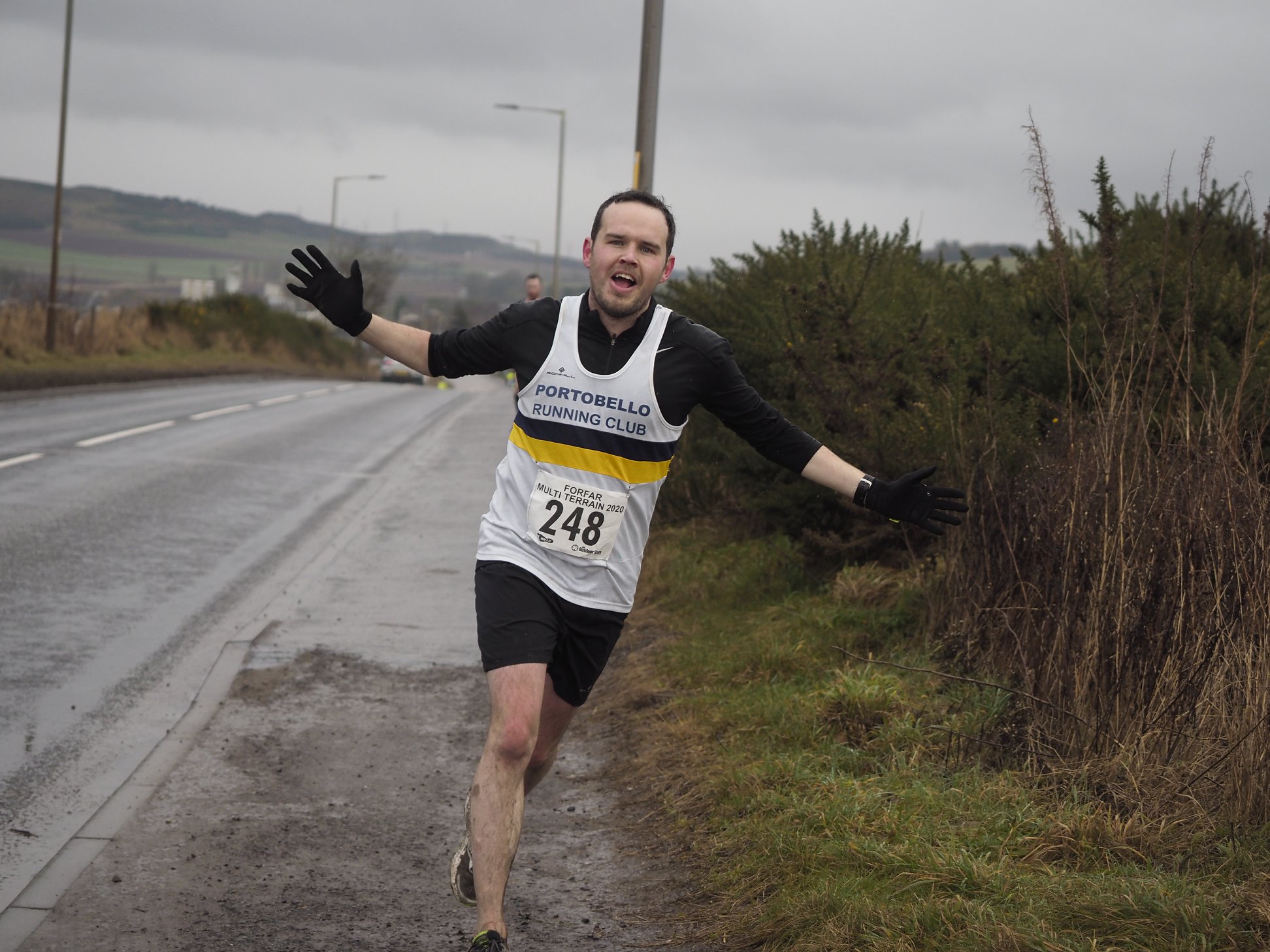 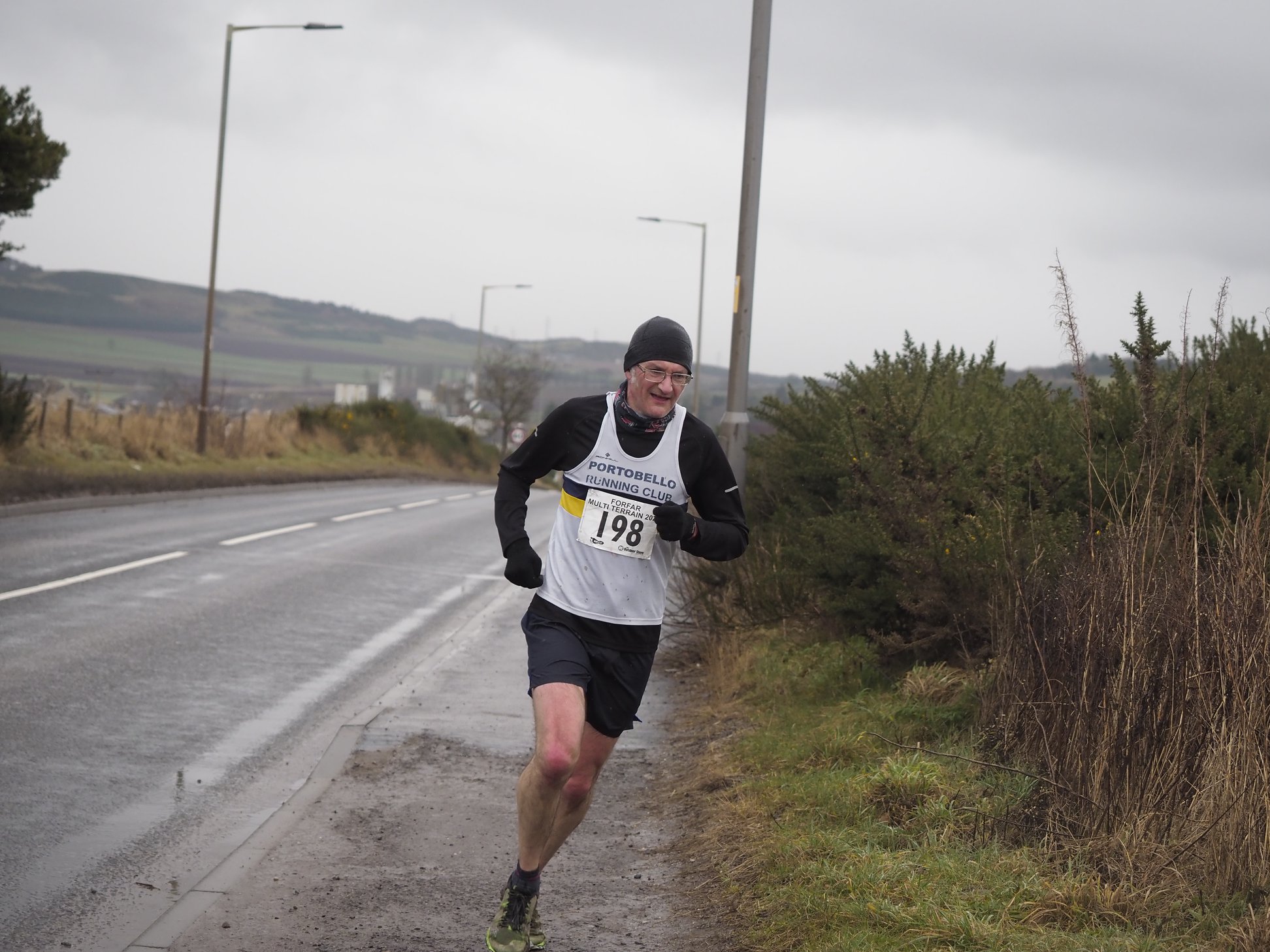 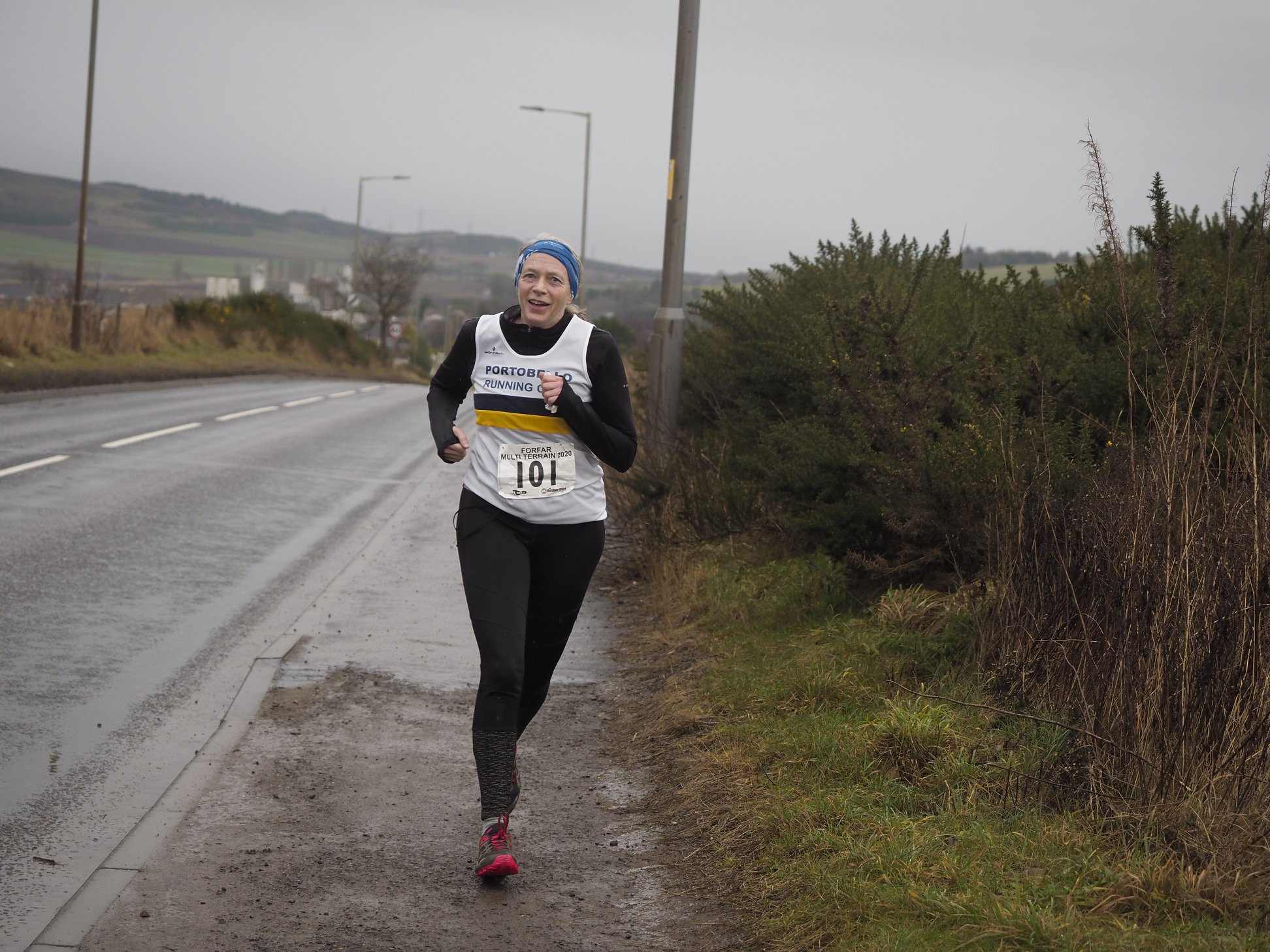 Soon I could see 3 runners ahead of me all evenly spaced around 100 metres apart and I got it into my head I could gradually pick them off over the 4 miles or so left. The hat came off as I was properly warm by this stage.

But I was probably past my best by then too and the hill at mile 10 (apparently known locally as the ‘Bummie’!) that beautifully draws you up to the wonder that is Balmashanner Monument, meant that those runners stayed well ahead of me. The views along this stretch were superb and though the climb was a mile long it was a highlight of the race. The descent was fun though tricky, with a rock strewn path providing ankle twisting opportunities. 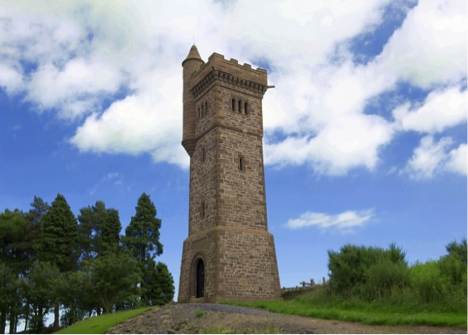 The last mile and a half was a bit dull, especially as I was tired and the Dundee Road Runner who I’d passed earlier and who seemed to have too much energy, cruised past me and off into the distance.

The last stretch took us through a small industrial area then back into the woods around Forfar Loch with the finish right next to the rugby club. Clearly Luke can’t count too good as 18 runners finished in front of me. Alan gave me a cheer and got a print out of my time – 1:31:25 and 2nd M50+. The fastest M50+ was a full 10 minutes ahead, finishing 4th – no prizes for 2nd place in the older age categories. Alan clocked up an impressive 1:28:38. Lee soon came home in 1:39:54 and Sarah got herself back into position in 2:08:52, fully 40 minutes better than last year.

A quick change but no shower as I was desperate not to miss out on the excellent fare provided! The weather deteriorated so we spent a good while indoors munching and supping, Alan and Lee taking advantage of the excellent free massages on offer. All in all a great day out, highly recommended 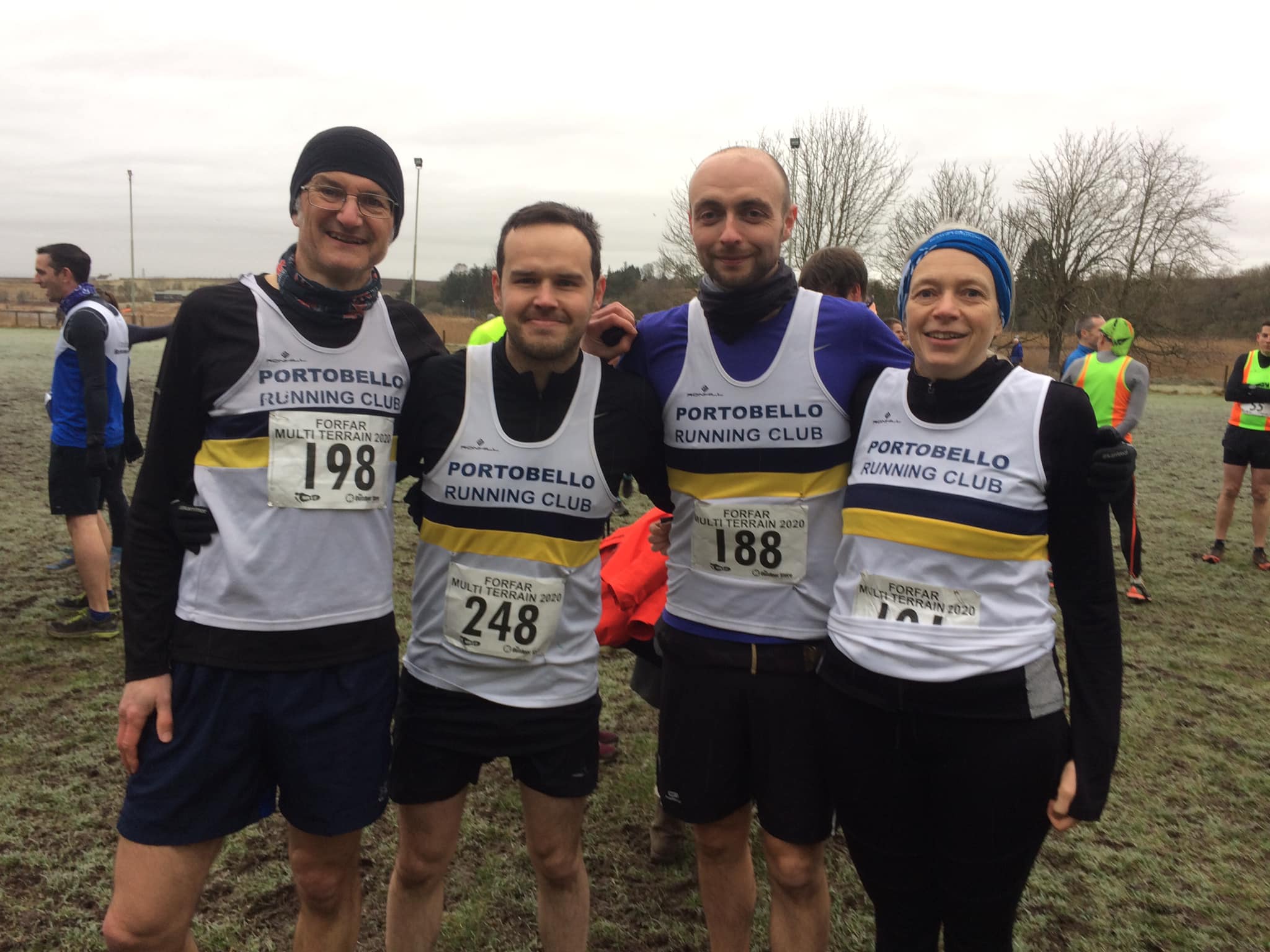