I really like Dent. It is on the Cumbria/Yorkshire border, technically part of the Yorkshire dales, and not far from the M6. I have been there on holiday a few times and the area is beautiful. I have run while there and loved it so when I found out there was a race it just seemed like a good idea.

I drove down from Edinburgh and was very entertained the last few miles driving behind a coach full of runners with a driver who clearly wasn’t familiar with winding single track country roads. There was really good representation from local clubs and from further afield – county Durham, Manchester, Widnes and Sutherland. I found one other Scottish representative, Tom from Harmeny RC.

This is a really well organised event. On arrival in the village you were directed to parking. Registration was straightforward. There was a portacabin with additional woman’s toilets set up in the village car park. The race numbers were chipped.

I had gone down myself but runners are a friendly lot and there was loads of chat. It was really obvious that this race had an older demographic, and the results bear this out, over fifty 45 years plus female runners in a field of 180. The gender split seemed pretty equal.

The race takes you out of Dent up into the hamlet of Gawthrop. Turned out I knew this bit of the route from my last stay there, a climb then a drop to run along the river Dee, up through farms and down again over a bridge, up onto the narrow main road and back towards the village on a mostly downward route. You continue to run along the river, moving on to an even narrower road which runs parallel to Dent. There was a fair amount of local support and a lot of cheery marshalls.

There are actually two races, and as the route rejoins the main road those running 7.1 split off back towards their finish line. By this point I was settled into a comfortable pace and maintaining distance from a couple of people I had been behind from the start. The route began to seem familiar and I realised I had run it several times the first couple of times I had been to Dent. I may have become slightly complacent because of this. In the last couple of miles before the turn I was picking people off, more as they were slowing than due to any great effort on my part. Tom had warned me that the last four miles were really tough. From 11.5 there is an awfy lot of undulation. I kept hearing Terry Kirkwood shouting about short steps and on your toes. I do like a hill but the up and down bits were getting relentless. A woman I had passed went in front of me….

Overall I definitely moved up the field over the last couple of miles but a woman I had been chasing from the start proved impossible to catch. Following the last descent into the village I was discombobulated by the route not being as I expected and veering off to the left, and this was compounded by having to run over unexpected cobbles. This slowed me down and as I approached the finish I was aware of someone on my heels, and I dredged up a last push to keep her at bay. Just. I crossed the line with a chip time of 2:03:07 and a position of 80/180; very pleased to be in the first half of the field.

Covid restrictions meant that there were no showers or changing facilities, which I think there usually are. However, the committee had still put on food, there was a walk through where you could pick up one of a choice of rolls with gluten free options, which were in a bag with a scone and two cakes and get tea and coffee. Very welcome.

I would recommend this, just over three hours from Edinburgh for a decent length of run which probably makes more sense than some previous excursions such as up to Braemar for a 20 minute run as part of a cross country relay team!

Random fact about Dent. There is a war memorial in the churchyard which commemorates someone with the fantastic name of Rainforth Pelham. 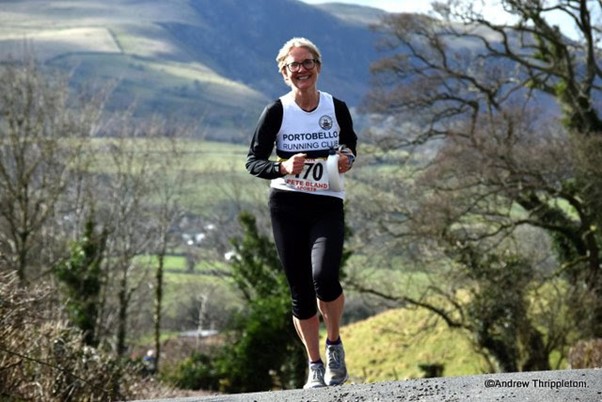